Antena 3 › Politics › Barack Obama’s strategist, the adviser of Victor Ponta. "You have an unpopular president and people are hungry for a fresh perspective"

Barack Obama’s strategist, the adviser of Victor Ponta. "You have an unpopular president and people are hungry for a fresh perspective" 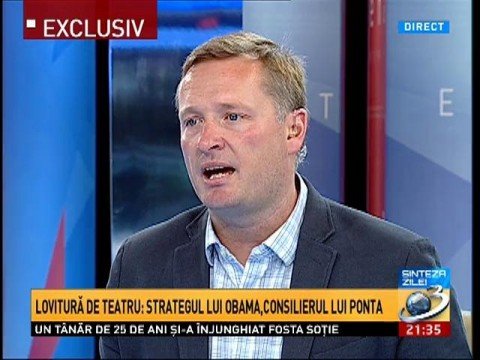 Barack Obama’s strategist, Mitch Stewart, the man who achieved important victories for the most important leader of the planet, was the guest of  Mihai Gadea on the Daily Summary show.

Mitch Stewart has accepted to become the head adviser of Victor Ponta.

"I’ve  had the opportunity to meet with Victor Ponta in Washington, six months ago," said Mitch Stewart. "You have an unpopular president and people are hungry for a fresh perspective," the strategist said.

The most important statements of campaign strategist  Mitch Stewart:

I think young democracies look to the USA. You must understand that we protect the freedom of expression, which is very important.

When he came to Washington, Victor Ponta had meetings with the most important officials.
Romania is very important for the United States, our relationship is very important. This is why Mr. Ponta. discussed with the Vice President  of the USA.

Romanians want to get away from  Basescu’s machinery. We do not know who will offer Romania a new start, that's the current problem of Romanians.

Mr. Ponta managed to raise pensions for many Romanian. Mr. Iohannis and the others were against Mr. Ponta in this fight.

Do you want to continue with the past or want something new? These are the two options. I trust that Romanians will take on the new road.


Basescu understands that Mr. Ponta represents the  change in Romania and he tries  to pull down Victor Ponta, wants to  keep him  involved in the same petty politics.

Supporting  Mr. Ponta is very important to us. I saw that the economic indicators are positive. You must go ahead with these policies to succeed.

Romanians want to change, they do not want to continue the regime and policies  Basescu created, policies that have divided the country.

I can feel that Mr. Ponta has got a real opportunity to offer Romania something new.


I believe his strongest point is the fact that he has fought for young mothers and pensioners.

I can feel that Mr. Ponta has got a lot of support across the country.

- Victor Ponta has got a large  track record  as  prime minister and he has done a good job. People know he can bring along a new perspective. He is worth your vote.