Radu Tudor: It is very good that Mircea Băsescu attacks Antena 3. It means we do well what we do 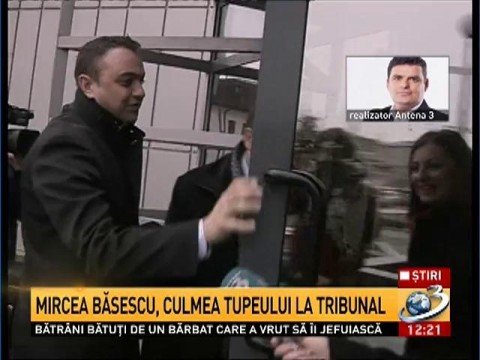 Producer of the "Meeting Point" show, Radu Tudor commented on Mircea Basescu's statement on Friday that "If the public opinion is formed by Antena 3, then we are doomed!"

Radu Tudor has explained it is very good that Mircea Băsescu is making such statements and it confirms that everything Antena 3 is doing is ok.

" It's very good that Mircea Băsescu says this. It is a title of honor. Every day we are criticized and insulted by the Basescu brothers, it means that we do well what we do. These two individuals at the margins of society, both with a very, very strong criminal character, one of them arrested, the other still at large, every day they find nothing better than to curse Antena 3.
Unlike these individuals, Antena 3 has a very serious audience and, obviously, everything we have said in recent years about their criminal activity is confirmed by prosecutors and judges. It means we're still on track. I hope he is no longer concerned about the tomb he wanted to prepare for Mugur Ciuvică, I hope he will be concerned about how many years he will get for a clan association with the underworld. "
Also, Radu Tudor explained that most likely the revelations by Antena 3 causes true nightmares for the two brothers.

"Because these two Corsican brothers, competitors at violating the law for the last 10 years have not been punished properly, then the Antena 3 revelations are causing them nightmares. It is not time wasted. Through the video broadcast on Antena 3, in which he says that a "pile of money" was pus in his arms and that he received "only" 250,000 of 600,000 euros, obviously this thing makes him crazy.
Other videos may appear , new evidences may come to Antena 3 of the criminal activities in the past 10 years. It's only been two months, and the world is beginning to take courage. All their criminal activity in the last 10 years is just beginning to surface. "