Traian Băsescu discussed over the phone with Joseph Biden. See the topic the two officials approached 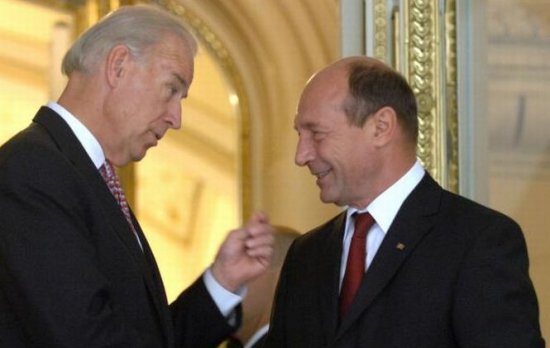 President Traian Basescu had a telephone  conversation  with  the US vicepresident, Joseph Biden.The topics approached by the two officials  targeted bileteral relations, the Deveselu base, the crisis in Syria, The European Union and  Romania’s economic perspectives as well as the American investments in our country.

“ Vice president Joseph Biden expressed his gratitude  towards the Romanian president Traian Băsescu, for the way our country involved in the political and military projects concerning   international security, as well as for the participation of Romanian troops in the military operations in Afghanistan. At the same time,  the vice-president welcomed, on behalf of the United States,  the beginning of the works for the placement of the anti-missile defense shield in the Deveselu base, an important component  of the NATO security and defense structure”, the Presidency press release says.

President Traian Basescu reiterated his  special interest in the  strategic partnership between Romania and the United States, noting that bilateral relations between our countries are, at this moment, one of the strongest guarantees for the national security and regional stability in South East, the statement reads.

“ President Traian Basescu and vice-president Joseph Biden have assessed the crisis in Syria  and have analyzed the capabilities available targeting the quick implementation of the political decisions regarding the  cancelation of the Syrian chemical arsenal.  President  Traian Băsescu and vice-president Jopseph Biden have also reviewed the success factors in getting closer to EU of Ukraine, Georgia and the Republic of Moldova at the Eastern Partnership Summit in Vilnius (the Republic of Lithuania), in the period November 28 to 29, this year, president Traian Basescu appreciating that the three countries  have real chances in the EU association process and that Romania will support them wholeheartedly”, the press release says.

According to the Presidency, Traian Basescu spoke about the "importance of U.S. investments in our country, with a particular focus on areas that would generate economic development, as research technologies, IT industry, car industry, agriculture, food and petroleum equipment industry. "

"The U.S. Vice President Joseph Biden stressed the great potential of Romania's economic growth in the upcoming years if it continues to develop a predictable and transparent business environment," the Presidency informs.