Victor Ponta: The Government supports all the objectives presented by Traian Băsescu 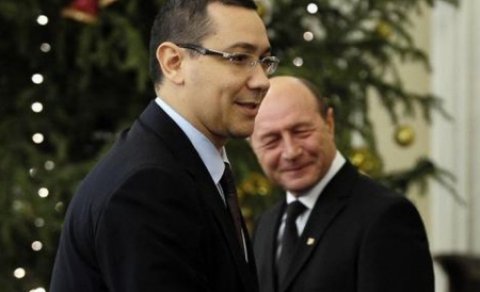 Premier Victor Ponta has stated Tuesday  that the Government he leads completely supports  the objectives that Traian Băsescu  has presented in Parliament. The Prime Minister has  showed, though, that there would still be  presidential advisers  or analysts  who  would talk about how Romania  is heading towards Russian and Kazakhstan.

“President  Băsescu spoke in Parliament about Romania’s  important objectives, which the Government supports completely. We are talking about  the EU and NATO memberships, the strategic partnership with the United States,  joining the Eurozone and the Schengen Area. These are  fundamental objectives  that the Government  I am leading supports, and has set them  in the government plan”, Ponta said.

“It is important for you to hear  what the president of the country says, what the prime minister says.  Obviously that does not mean  that you won’t still be reading about all kind of presidential advisers or analysts  who, either from stupidity, either out of dishonesty, are always talking about  how we are heading I do not know where, to Russia, to   Kazakhstan, or wherever”, the premier continued.

According to Ponta, Romania’s fundamental objectives are very clear and assumed by the President, Prime Minister and Government.

President  Traian Băsescu stated Tuesday, before the Parliament that the Schengen accession must become a priority objective  Government-Parliament-Presidency and he proposed the  appointment of the management of the General prosecution, the DNA without delay  and the removal from the Cabinet of the ministers criminally investigated.

Băsescu proposed the Parliament and the Government a partnership  for the achievement of the Schengen accession objective, considering it  a “duty before the Romanians”.