Corneliu Vadim Tudor, in the “President’s Office": Romania is a colony. The ten years with Traian Băsescu are a black page in the history of Romania 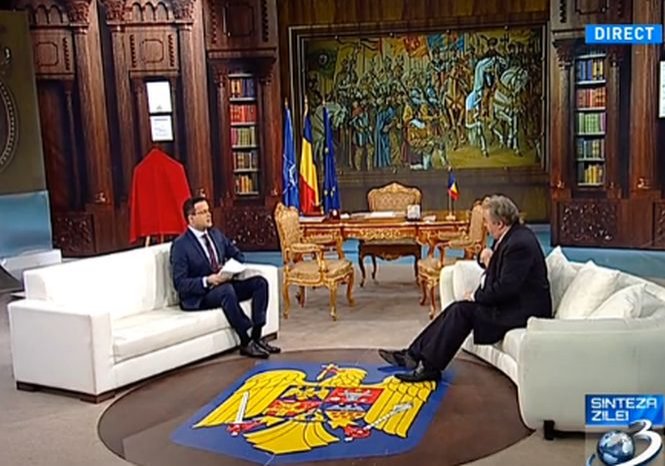 Corneliu Vadim Tudor, candidate for the Romanian presidency on behalf of the “Greater Romania" Party was Mihai Gâdea’s guest Tuesday evening in the "President’s Office".

"They are a black page in the history of Romania. I've said it many times to him. They should not have amputated pensions and salaries. These austerity measures did not provide results anywhere. I know what happened; I remember the hours and days. On May 5, 2010, I was in the European Parliament.

A resolution was passed against the use of cyanide in the rare metals mining targeted at the Rosia Montana, where there is not only gold and silver, but also uranium. Uranium that they had put aside for George Soros. That day Soros called Basescu. And the next day he held a press conference because he did not have any money. That one had cut his funding. He had been blackmailed and threatened, " Corneliu Vadim Tudor said about the 10 years with Basescu.

Corneliu Vadim Tudor also talked about the "obligations" president Băsescu generated, which have led to the impoverishment of the Romanians .

„Romania is a country that is simply not allowed to be poor, it sits on some extraordinary valuables. In the Valea Prahovei area there are still hydrocarbons richer than the deposits exploited in the past 100 years.

On the Black Sea continental shelf there are natural gas deposits. Romania is extraordinarily rich. Who is to blame that Romanians are starving? The advantage and my advantage is that I was in power and I refused to go stealing with the thieves " Corneliu Vadim Tudor said.

"Romania is a colony and Traian Basescu is an American agent, recruited in 1998. Let him join us live if he has the guts. He won the City Hall imposed by the Americans. In reality Adrian Nastase won in 2004 and Mircea Geoană in 2009 . They imposed him, because he is a Yes Man ".

„Such a propaganda for this second hand German has never been seen. It does not really show on the surface but America and Germany are like the cat and the dog"

About PSD and the justice:

"At the PSD, there is blood on the walls. I called Viorel Hrebenciuc, and told him to stay strong, this thing will not resist. You have negotiated that office for a law. Well I am also calling for a law, the amnesty law, for Gigi Becali, for Gică Popescu, for Jean Pădureanu. These people are dying in jail. I’ve counted 10 people so far, political opponents thrown in jail ".

About the reason he is running:

"Truth walks with its head smashed. Romanians are thirsty for truth, I can provide it. Romania is full of riches, God has blessed us. But these hawks are circling us. The manhood in this country is not dead yet. There is nothing they can do to me. I will destroy the calculations many have made for themselves. This is why I am running again. "

One word characterizations for part of his opponents: