Antena 3 › Politics › Romania seen from the U.S. Matt Browne, world leaders strategist: I am impressed with the involvement of Mr. Ponta

Romania seen from the U.S. Matt Browne, world leaders strategist: I am impressed with the involvement of Mr. Ponta 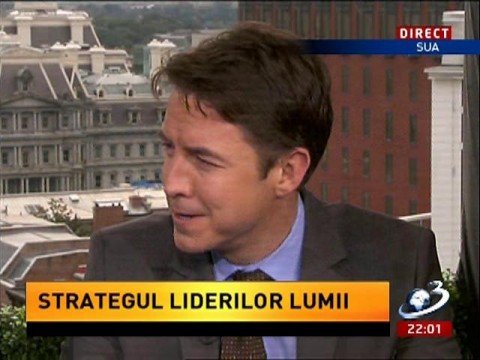 Live from Washington, Mihai Gâdea and Adrian Ursu presented Tuesday evening on Antenna 3, the background perception Americans have about Romanian politics and justice.

Matt Browne, one of the world leaders strategists, worked 10 years for UK’s best beloved PM, Tony Blair, and today he is one of the most important people of the Center for American Progress.

This organization(Center for American Progress) is the organization closest to president Barack Obama.

"I’ve started working 10-15 years ago and the idea was to bring important people to discuss together. It was a progressive thinking. (...) It is an extraordinary work. We want to see how we can work together to troubleshoot joint problems " Matt Brown said.

According to him, the actions undertaken by the Romanian Prime Minister are steps in the right direction.

"The fact that he came here, he talked with Mr. Joe Biden ... I'm impressed with the involvement of Mr. Ponta. Using such actions can only change the way you are being perceived."

Asked about his view as to why Romania hasn’t achieved more in all the years since the Revolution, Matt Browne said: "I think you've achieved a lot. 25 years are not so much from the point of view of society, but I think it is very important while advancing that you have the freedom and independence of the press. It is impossible to have a free society without a free press. "

Matt Browne made ​​a comparison between the political status in Romania and the U.S..