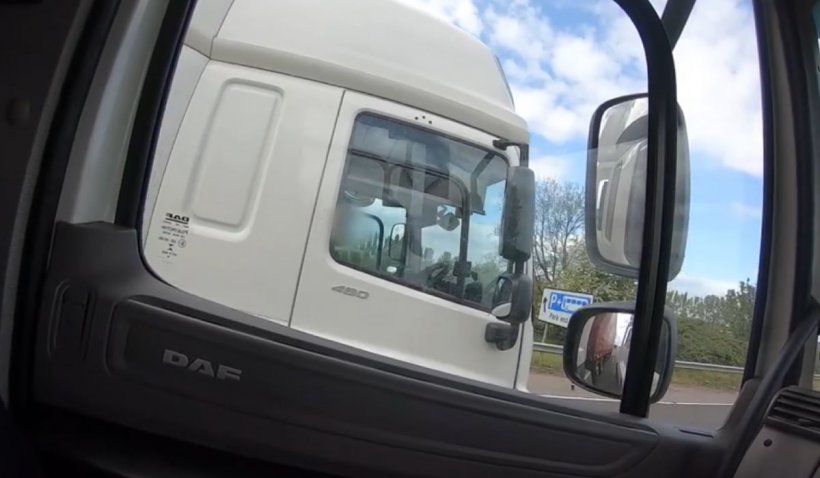 Our Roads Policing Unit were secretly observing those driving on the M5 last week as part of a joint operation with Highways England. Operation Tramline saw an unmarked lorry being driven on the motorway last Monday to Friday (10-15 May) which allowed officers to gather evidence of distractions such as using a mobile phone, not wearing a seatbelt or insecure loads. On Wednesday a lorry driver (shown in this video) was stopped after he was seen to be watching a Formula One documentary on his mobile phone. He was given a ticket for not being in proper control of his lorry as well as given words of advice about the possible consequences of his actions. The use of a mobile phone whilst driving is one of the 'fatal four' causes of road deaths and injury in the County along with inappropriate speed, not wearing a seat belt and drink/drug driving. Officers who identified a driver committing an offence recorded video footage from the unmarked lorry before notifying officers in an accompanying car. These officers then intercepted the offending vehicle, pulling it over and dealing with the driver. Over the week a total of 70 drivers were stopped for offences such as being on a mobile phone, not wearing a seatbelt, driving at excessive speed, not being in proper control of their vehicle, having insecure loads or not insurance/MOT. The drivers who were stopped were issued with tickets or given warnings/words of advice about their actions. Sergeant Lucy Powell said: "Operation Tramline is a national operation in partnership with Highways England and it allowed us to use an unmarked HGV cab. "Drivers using a phone behind the wheel are four times more likely to be involved in a collision, far less likely to notice and react to hazards, more likely to show poor lane discipline and make more variable speed choices. "The vantage point that we got from the cab allowed us to detect offences that we might not see from our normal patrol vehicles, particularly with heavy goods vehicles and larger vans. "The use of the cab was a really great tool for keeping the roads of Gloucestershire safe." Before last week's operation, 65 people had been given tickets for using a mobile phone whilst driving and 12 tickets were issued for not being in proper control of the vehicle. 13 people are also due to be prosecuted for not paying the fine. Operation Tramline has caught over 4000 distracted drivers so far this year after they were seen to be committing a variety of offences including driving while using mobile phones, not wearing a seatbelt, speeding and drink or drug driving. The Operation has been in place to crack down on offenders who continue to break the law and to help decrease the number of people killed or seriously injured on the Highways England road network (motorways and major trunk roads).